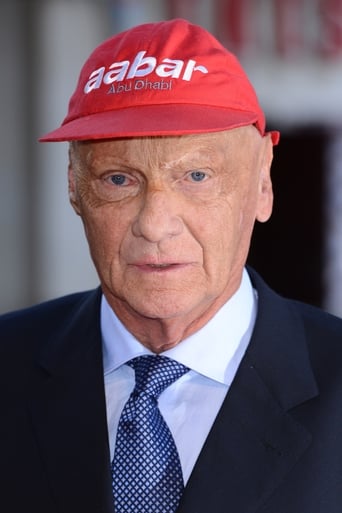 From Wikipedia, the free encyclopedia. Andreas Nikolaus "Niki" Lauda (born 22 February 1949) is an Austrian former Formula One racing driver who was the F1 World Champion three times in 1975, 1977 and 1984. More recently an aviation entrepreneur, he has founded and run two airlines (Lauda Air and Niki). He was also the manager of the Jaguar Formula One racing team for two years. He is currently working as a pundit for German TV during Grand Prix weekends and acts as non-executive chairman of the Mercedes AMG Petronas F1 Team. Lauda was seriously injured in a crash at the 1976 German Grand Prix at the Nürburgring, during which his Ferrari burst into flames and he came close to death after inhaling hot toxic fumes and suffering severe burns. However he recovered and returned to race again just six weeks later at the Italian Grand Prix. Scars from the injuries he suffered have left him permanently disfigured.